Leave a comment Posted on December 21, 2014December 22, 2014 by Kaisa Osola Articles in English
This is not really a signature story of Radio Changes. There’s no radio changes in it. But there’s radio and there’s changes. ”It’s nice to swim” is a six minutes audioscape on what Christmas sounded like in Carl Sithole Centre’s children’s home in Soweto, Johannesburg. The changing question goes: what are you grateful for?
We cycled to Carl Sithole Centre as we learned that it’s run by two Finnish people: Metti and Tero Saajoranta. We recorded the Christmas magic since what can you do when you meet a Santa speaking all the 11 official languages of SA. We asked about gratefulness since it’s one of the biggest things that surprises us here, day by day – because it’s quite often missing in front of small things and good basic life in Finland. Pardon, ei ole tarkoitus jeesustella. Usein vain tuntuu, että niin moni asia Suomessa on hyvin, että perusasioita pitää itsestäänselvyyksinä. Siksi ennen joulua syntyi tällainen juttu. Ja se, että perusasioista on kiitollinen, ei tarkoita, etteikö kaikkea voi parantaa ja kyseenalaistaa. Kiitollisuus on bensaa.
Thank you for a hot day’s Chrismas party, everyone at Carl Sithole Centre on the 18th of December 2014. A special thanks to Santa, the longtime renowned chauffeur of the Finnish Embassy in South Africa. Haha, off went the fairytale Santa magic… But this man was true magic, as were the kids’ Christmas gifts and lunch offered by the embassy staff.
Photo: Matias

South Africa was one of the last countries in the world to introduce television to its people in 1976 – 40 years after pioneers like UK or Germany and even 20 years after Finland. The reasons for the delay seem entirely crazy. Then again, they are very much in line with the apartheid era. However, from radio’s perspective the late introduction of television bears great stories and memories.

Photographer Mike Abrahams, a colleague of ours from Westbury Youth Centre, lived his childhood in the 70’s Johannesburg. In his memories radio was the top, the only, the most exciting entertainment media available. The stories cling to many European memories from the 50’s. So, what was the place and role of radio in a coloured boy’s life in the 70’s Joburg? What happened when TV came? How did radio change? Did it vanish? Way no. Something much better was to come, even under the apartheid rule.

The clips from the topmost legendary South African Radio Drama, Squad Cars, are a courtesy of Sonovision Studios and SABC.

The clip from the Kofifi FM broadcast on the 19th of November 2014 at 11h30, as well as the jingles framing it, are attached to the interview with the permission of Kofifi FM. Thank you for cooperation, Kofifi CEO Joseph Cotty and sound engineer Ralton Seegels.

More info on the legendary Squad Cars is available e.g. in the abundant Internet Archive. Enjoy!

For a more detailed analysis on South Africa pushing the introduction of TV till 1976 check e.g. Bernard Cros’ article in ORACLE. 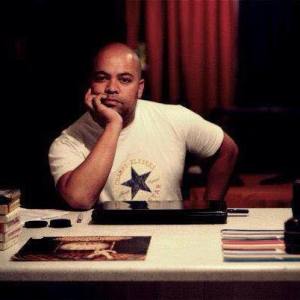 Coco Merckel is a renowned South-African performer, writer, producer and director. Graduated from FUBA (Federated Union of Black Artists), he has been professionally hyperactive in the theatre, film and television as well as in community and corporate theatre fields for 22 years. In theatre he is best known for his critically acclaimed one-man show “No Room for Squares”. In TV his role as Witboy in the sitcom “Suburban Bliss” won him a nomination for an Artes Award for best actor in a comedy. In community theatre Coco tours as a field worker locally and internationally for the Market Theatre Laboratory.

Born in Westbury Johannesburg, Coco has settled one of his community theatre projects in Westbury Youth Centre. The project, created and run together with Esmeralda Bihl, a renowned actress born in the Westbury-neighbouring Newclare, trains the drama group of WYC on how to develop, write and perform a radio drama. The changes are there! They’re here. They’re tactile. The WYC drama group is bringing radio drama back to local radio stations. The students write and produce drama series on issues true in their lives and raised during their research sessions in Westbury and its neighboring communities. They are changing themselves and their communities. No exaggeration here. Just a big hand to Coco and Esmeralda. And a small, equally true one for WYC Radio device donators.

Each series of the “I Am Awe-Ness Productions'” radio dramas has five episodes. The first of the series “It only takes one line” focuses on substance abuse. It is broadcasted in partnership with Eldos FM as well as in WYC Radio SoundCloud. The first airing on Eldos FM was on 25th October 2014, and the series will be broadcasted again in the beginning of November.

The next series? Soon.

Listen to a man passionate in radio drama and convinced in its power. Listen to his students in action. He’s crazy, yes. It’s all true.

Photo of the recording of “It only takes one line” by I am Awe-Ness Productions: Matias Harju

Leave a comment Posted on September 1, 2014October 6, 2014 by Kaisa Osola Articles in English

Paula Salovaara is one of the key actors in the Finnish radio scene. She has been involved in numerous radio changes since 1980’s, among them a legend: the first remarkable private urban radio station Radio City. In the year 2000 she shaked the Finnish radio scene by putting up her own work of art: Radio Helsinki. It’s one of the pioneers of Internet radio in Finland and nowadays a renowned local music and talk FM radio. With the concept of no playlist, tens of professional dj’s and long discussion programs Radio Helsinki was said to never be able to succeed for more than a year. On the 1st of September 2014 the urban dream just celebrated its 14 year anniversary. The times are hard. So are the workers on the little legendary channel. Looking back to the year 2000: why did Paula Salovaara want to put up something as crazy as an own radio station?